Wild on the Lochan 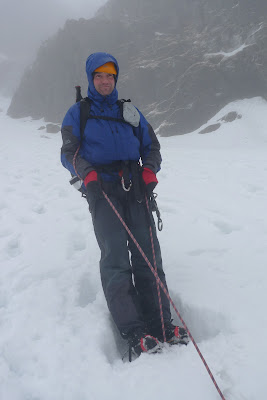 The plan for today was to look at some steeper ground around grade 1 and some of the ropework skills you can use in this sort of area. I took my 3 man team up to Stob Coire nan Lochan with the aim of finding some snow which was sheltered from the strong winds that were forecast. I was also a little concerned about the amount of snow that was forecast to fall and the knock on avalanche risk.
It was windy on the approach however the freezing level was much higher than forecast with it not starting to snow till 950m. I headed up into Broad Gully and we spent the some time doing 3 short pitches up this with the team leading and me soloing along side helping out if needed. With lots of bucket seats and horizontal axes dug we then descended via 3 abseils off snow bollards before doing a lower off a spike. Then to get us back into the corrie floor we looked at stomper belays.
It was not as windy as forecast and not as much snow fell however it looks like it will be windy and snowy tomorrow.
Posted by Sandy Paterson at 9:53 pm