Wet Week ends on a High!

I have been working for Jagged Globe this past week on a Winter Mountaineering Course. It has been a challenging week with high winds, rain and a freezing level above the summits each day apart from Friday (pictures above). There was a big team on the course many who were off on expeditions in the not too distant future with Denali being the favourite.
On Monday Andy Stotesbury and I took our team of 8 to Glen Nevis after a morning indoors looking at ropework to do some abseiling and other ropework. On Tuesday we were joined by Andy Chapman to lower the ratio's and we headed into Stob Coire nan Lochan were we got onto some fairly soggy snow to look at movement skills, snow anchors and introduced short roping movement. It was a fairly grim day with constant rain but the team did well to stay warm and motivated. Wednesday was another poor forecast so the morning was spent at the Ice Factor and in the afternoon the Jagged Globe Doctor David ran a 1st Aid Session and answered questions on altitude issues. Thursday was spent looking at crevasse rescue, fixed lines and some dry (wet) tooling. Finally Friday brought us some cold weather so we headed to Ben Nevis to see what was left. With other instructors joining the team we had a ratio of 1:2 so we could climb. I was with Garry and Roy who were both off to Denali and were keen to climb some steep snow up and down with one axe. We headed towards the Douglas Boulder to do the West - East Traverse and although west gully was broken in places it still worked well. Andy and his team had the same plan which made it nice and sociable! We climbed west gully in 3 pitches before Garry and Roy down climbed east gully in 1 long 60m pitch. We then traversed into Observatory Gully and headed back to the bus. A good end to a challenging week. Good Luck Garry and Roy with your trip in May and thanks for your company, along with all the others on the course.
Conditions high up on Ben Nevis were not too bad with Green, Comb, Cascade, Smiths, Tower, Central, North, Glovers all getting ascents or looking reasonable. Now we just need some colder weather or snow! I was meant to be ski mountaineering this week but that has been cancelled, might have to dig out the rock shoes!
Posted by Sandy Paterson at 3:08 pm No comments:

I have just got back from a weeks climbing in Rjukan Norway were I was working for friend and fellow instructor Rob Johnson. There was a team of six motivated and capable clients out along with Rob, myself and Mark 'Baggy' Richards. We spent the week climbing in various locations including Upper and Lower Gorge, Ozzimosis, Rjukan Centre.
As ever it was a great week with cold temps, steep ice and short approaches. Thanks to the team for their great company.
Back across west to work for Jagged Globe this coming week, think I might be wishing I was back in Norway!
Posted by Sandy Paterson at 10:43 am No comments:

Week on the West 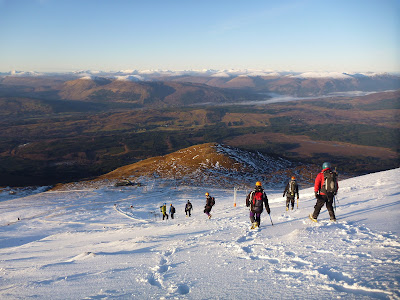 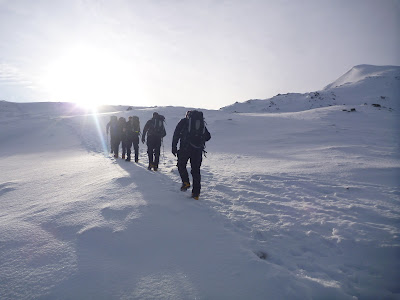 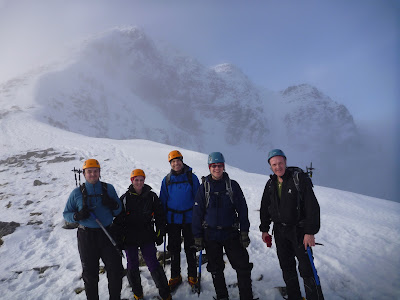 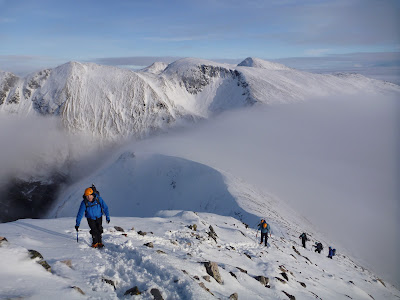 I am just back home from a weeks work for Jagged Globe on the West Coast, I was working with Alex on an Intro to Winter Mountaineering week. The week started off with stunning conditions and then slowly got warmer and cloudier but that did not slow the group down and we had a great week looking at movement skills, avalanche awareness, winter ropework and navigation. Over the week we visited The Nevis Range, Buchaille Etive Beag, Glen Coe Ski area, Mamores and The Zig Zags.
A great week with a great team. I am off to Norway tomorrow for a weeks work out there before heading back across to the west for another week with Jagged Globe.
Posted by Sandy Paterson at 11:18 am No comments:


The last 3 days of the Winter ML Training for Glenmore Lodge have been great. I was grumpy on Thursday when I forgot my camera as the weather was stunning. We spent the day on a mountain journey to look at the remit of the award, personal movement skills in steep ground and some issues that may well occur. To do this we headed into Corie an t Sneachda then up to the climbers col along the Ficail and then across to the top of the Hidden Corie before coming back across and down the Goat Track, it was a stunning if a little cold day out.
Friday had us setting off for our snow holing trip again in stunning weather, this time I remembered my camera (photos above). We headed to Garbh Uisge Beag to spend the night. We then headed off for 4 hours of night nav which took in the summit of Ben Macdui. On Saturday morning the weather as forecast had changed and this gave us a great opportunity to put into practise what we had covered the day before. We navigated across the plateau to spot height 1141m before dropping down the Cas Fiacal and back to the bus. A great trip and week were the team got a little taste off all types of Scottish winter weather, perfect!
Off west for the next week for a week of Mountaineering for Jagged Globe.
Posted by Sandy Paterson at 11:20 am No comments:


Yesterday was day two of the ML and we headed into the Cas headwall to continue our look at winter movement skills. It was a wild day with 50+ mph winds however we managed to cover everything we needed to and the team did well.
Today was a much calmer day and we headed into the Ciste area to look at snow anchors and this ropework skills needed at winter ML level theses included bucket seats, horizontal axes, snow bollards and stommpers. We then finished off with some confidence roping and looked at some avalanche sample pits. A good day out and nice not to be battered by the winds!
Posted by Sandy Paterson at 8:20 pm No comments: