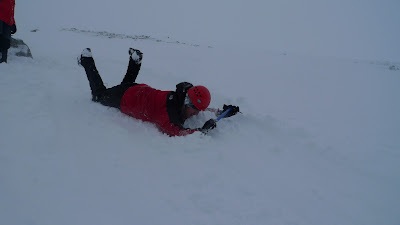 I am back at Glenmore Lodge this week for another 5 day Winter Skills Course. After our intro chat this morning and a look at suitable winter equipment we headed off up the ski road to Coire Laogh Mor..................or so we thought, the ski road was closed due to snow! After a quick chat with the friendly man on the gate he did not think it would be open for the next hour at a minimum so the decision was quickly made to park the van and walk up the road! Not quite the start to the day we had planned but actually a nice walk as it was all so quiet!
Once at the Ciste car park we headed into Coire Laogh Mor were we found some fairly deep snow drifts and neve that was not quite frozen. However we found some slopes that we could look at ice axe arrests on as well as some step kicking. The wind picked up in the afternoon but thankfully the road had been cleared and we did not have to walk back down it.
A good start to the week with a fair bit if fresh snow which will make safe route choice important tomorrow. There has been a fair bit of avalanche activity in Sneachda today. 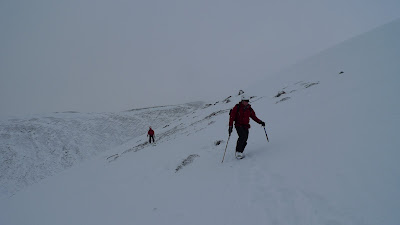 Posted by Sandy Paterson at 6:03 pm