We headed into Coire Cas this morning with about 10cm of fresh snow and clear blue skies. It was clearly windy on the tops but it was not too bad at all in the coire..............or so we thought when we left the van!
The aim for today was to introduce avalanche assessment and route choice. On the way in we stopped every now and then to talk about indicators for snow movement etc and the weather was really quite pleasant. However it started to change after about an hour!
Once in the very back of the coire I was surprised to see the whole back wall totally stripped of any fresh snow, not so good for avalanche assessment! We then headed around to the west ridge were we found a deposit of windslab on a gentle angle so spent some time looking at different ways to assess stability. This spot gave us a little shelter but not much! 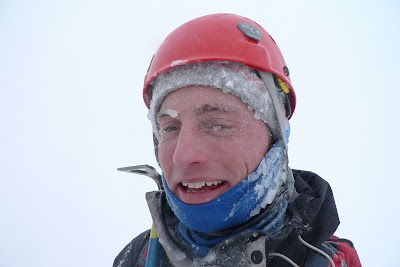 At around 2pm we were just beginning to think about to head up to the Ptarmigan and the winds picked up. So it was a battle with the winds back down to the car park which we got just in time as the ski road was shut! Good timing to as later that day and during the night the winds were recorded at over 150mph on the top of Cairngorm.
Posted by Sandy Paterson at 11:29 am