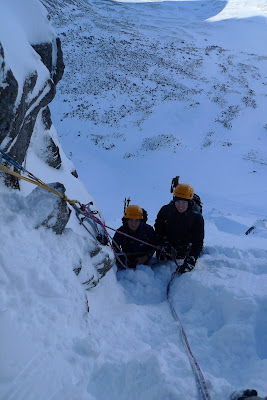 I was joined for the weekend by return clients Simon and Dave, last year we spent 3 days mountaineering and this year there were keen to try something a little harder. As we walked into Sneachda on Saturday morning it was clear that there had been a fair bit of fresh snow on the southerly winds the night before so I was a little concerned about getting to the routes and the avalanche risk.
This was then confirmed as when we got into the base of the coire we could see a large avalanche trail from the top of the goat track, plus a smaller one from underneath Stirling Bomber. There were 6 people caught in these who were air lifted out. After an inspection of the avalanche debris and an examination of the slopes I headed up towards the Trident area but as I got closer to the bay it was clear the snow was not stable, however the snow underneath Spiral Gully and Wavelength area was so we headed along with many others to Spiral! The route as you can imagine was covered in deep soft snow but the neve underneath was great. We climbed it in 4 good pitches to give Simon and Dave there first winter route and we topped out in glorious sun. From the top were headed back to the car via 1141.
An excellent day out and I hope those caught in the avalanche are OK. 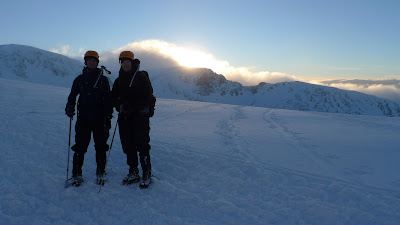 Posted by Sandy Paterson at 1:40 pm