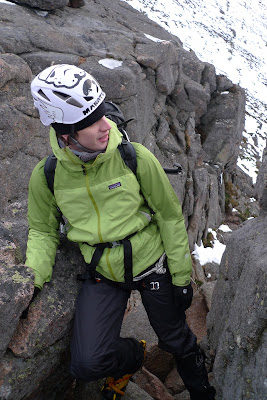 It was fairly wild in the ski car park this morning when Peter and I arrived. The wind seemed to by around 40 - 50 mph from the south and it was sleeting/raining. Mmmm a nice day ahead! It was clear that we were not going to get on to any too technical ground today which had been the original plan but we still headed part way into Sneachda. We used some of the snow patches on the way into Sneachda to look at some more avalanche assessment and a few other snow belays before heading back to the van. After a quick bite to eat in the van we headed down to the Ciste car park which was much more sheltered. We then headed into the ciste crag to look at gear placements including pegs and ice screws (there was the odd blob of melting ice). From there we headed for a scramble up there the crag and back down the ridge to the van. A good day was had even if we did not get the route in that we had planned.
The wind dropped around midday and the freezing level seemed to be around 900m. Laura and James reported great skiing on the piste after the wind had dropped!
Out with Peter tomorrow again for his last day, the forecast looks a little more settled with light southerly winds but it is warming up with freezing levels above the summits. This should slowly stabilise the snow pack (although probably not tomorrow) and as long as it goes cold again bring in some great neve for New Year. Keep those fingers crossed.
Posted by Sandy Paterson at 9:49 pm